who knows what evil lurks in the hearts of men? 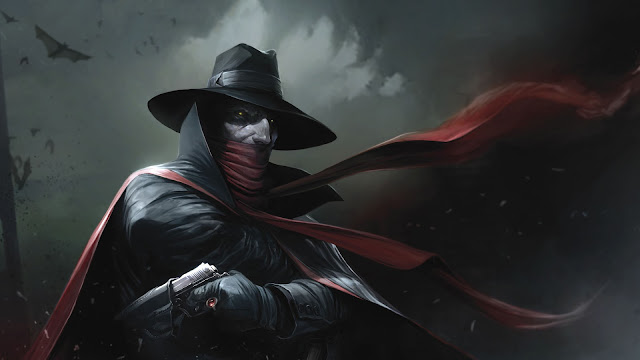 growing up ever since seeing the 1994 movie,
i've been a fan of the character, the Shadow.
so since i found the Reaper Miniatures version of the character
i wanted to include him in my Fistful of Lead games.

since he is a really special character (least in my eyes),
i created a profile for the Wiley Games' Fistful of Lead.
some of the traits i created and some i tweaked.

the Shadow
shoot: d12, close combat: d12
traits:
·Veteran: You use a d12 for all rolls.
·Two Guns: You can use burst fire at close range without having to
go “Out of Ammo” automatically.
·Tough as Nails: You can take up to 4 Wounds instead of 3.
·Smart: Add +1 to any task roll.
· Supernatural Abilities (psionics, pg. 45 of the Galactic Heroes rulebook)
- Master of Stealth: -1 to be hit if target of Shooting, this stack with Creeping.
- Expert Detective: the Shadow receives an extra +1 to task rolls.
- Shadow Walk: The Shadow can slide between shadows and cross distances in the
blink of an eye. On roll of 5+ the Shadow can move up to 12” in any direction including
vertically. On a roll of 8+, they may move up to 24”.
- Heal: Use 1 action, remove one wound or all shock markers.
- Hypnotic: use the Burst Template any models under it receives -1 to shoot and close combat towards the Shadow.
- Telepathic Mental-Clouding: You instill fear in all that meet your gaze.
As an action, you may use this ability on any enemy within 12”.
The fear is induced similar to Close Combat.
Both you and victim roll Close Combat dice.
If the victim rolls higher, nothing happens.
They have overcome their fears and are immune to any further
attempts by you to scare them. 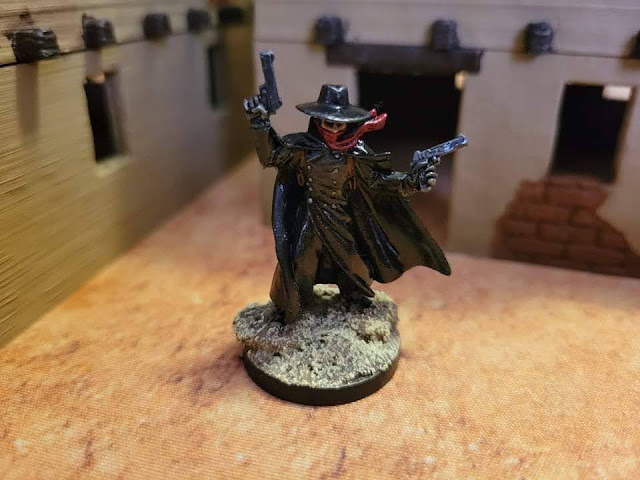 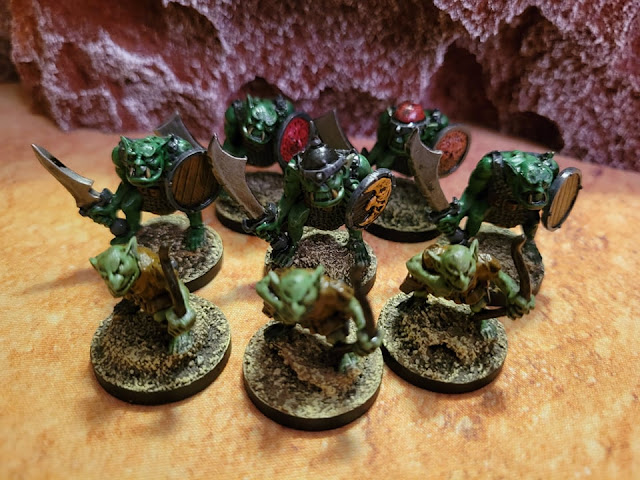 continuing my ORCtober challenge, i finally finished piecing together and gluing them to bases the first orc warband i tend to use for Fistful of Lead: Fantasy game. kinda lazy with names i took several ork names from Warhammer 40k, least the ones i remember from years ago and the ones i always thought were awesome enough to remember. Dragonmaw Clan this warband is made entirely out of the plastics from the classic box set Warhammer Fantasy Regiments.   Ghazghull Thraka and Nazdreg Grotsnik, Skargrim, and Gorgutz did not notice it until everything was painted but i did have the old Evil Sunz and Bad Moons shields mixed together. after seeing this kinda want to make either a pure Bad Moon or Evil Sun clan group now. or maybe just use just one or the other shield design with a different color scheme. da Gobbos
Read more 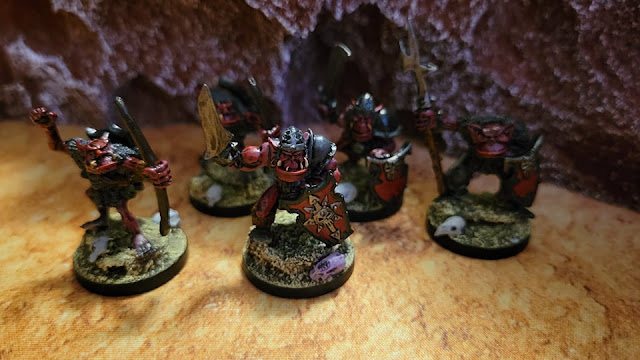 as part of my ORCtober challenge, i continued paint some more orcs for the Fistful of Lead: Fantasy. this time around i went in a different direction, and inspired by the Fel Orcs from World of Warcraft i painted them with red skin like in the mmo game. i also took the names of some of the more badass orcs from the game for this warband. the Fel Orcs Kargath the Bladefist Nek'rosh and Kilrogg Rend and Hellscream
Read more 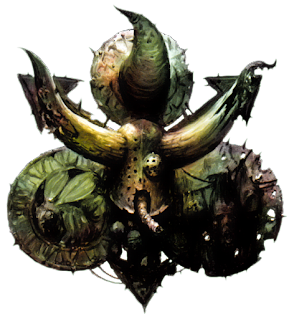 ● Tales of the Golden Scarab ●

● other hobby blogs to explore ● 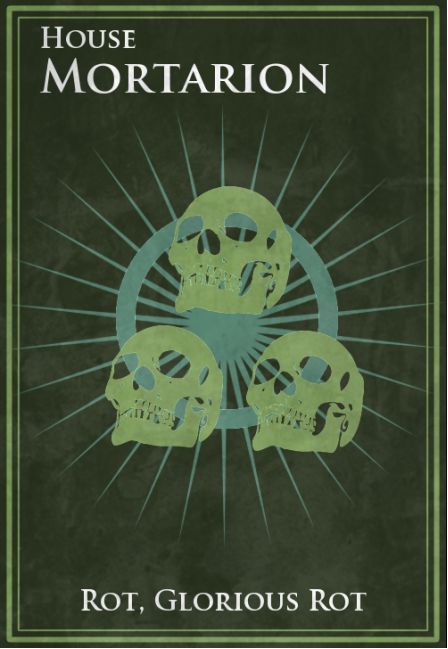 palm trees and a tentacle monster 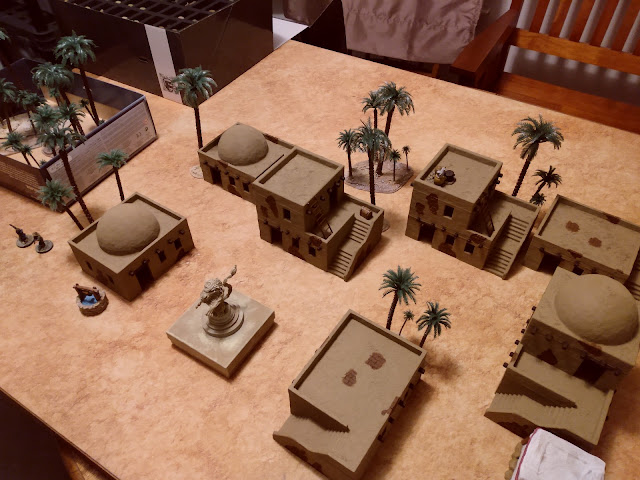 earlier this week i purchased palm trees off of Amazon. i've been wanting to do this for sometime now, but couldn't find the right trees. i bought two packs of trees that have twenty trees in each pack. five different sizes, four each for roughly $13 each. so i figured forty trees would be nice to have a good enough assortment when i go to base them and such. took several quick pics of finished product. quick set up with buildings and the newly added tree stands. was able to created twelve tree stands. sneaking through the palms. i made two large tree stands that has 5-6 trees on a stand. members of the Hell Hounds spotted the enemies, the sergeant starts barking orders.   another miniature from my summer miniature haul. a tentacle creature in a well.
Read more 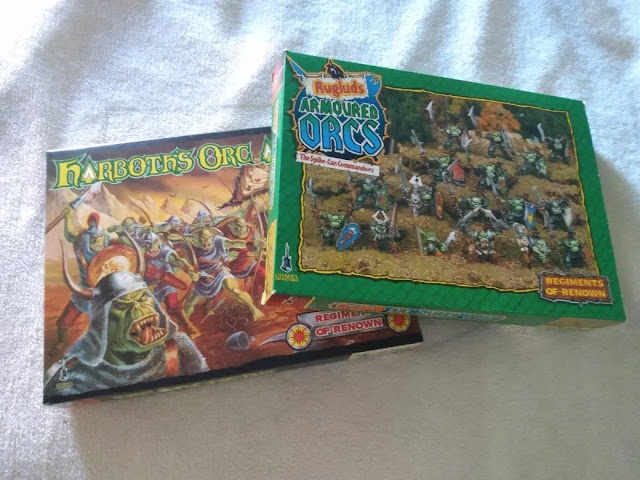 during the summer i was able to come across several box sets of old Citadel warhammer miniatures. was able to get a hold of two box sets of classic greenskins and one set of undead. at the time i was holding on to them because i didn't really have any projects that involved fantasy miniatures or any setting for that matter. also i also came across two box sets of warhammer fantasy regiments. i have to admit these box sets are really cool. i'm loving it, finding these old sets and miniatures.   at time of writing, little under a week ago Wiley Games finally released their FFoL: Fantasy rules. so at first i'm digging through all the orcs and gobins, and in the process of making a few warbands of greenskins for the game. i'm gonna model my warbands taking inspiration from Warhammer, 40k, and even World of Warcraft. over the next few days i am gonna celebrate the month October as ORCtober.
Read more